Run For The Shadows... 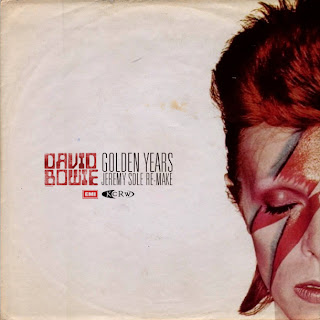 To celebrate the release of David Bowie’s re-mastered Station to Station, EMI Records asked 4 KCRW DJs, Jeremy Sole, Anthony Valadez, Eric J Lawrence, and Chris Douridas, to each remixed the album’s lead single, “Golden Years”. Station to Station was recorded in Los Angeles, so it was fitting for some of KCRW’s leading tastemakers to take on the task, with each remix heard by Bowie himself. Each DJ took a unique path in recreating, deconstructing or re-imagining the classic song.
DJ Jeremy Sole flew across the country to work with Victor Axelrod, aka Ticklah, the keyboardist for Antibalas Afrobeat Orchestra and Amy Winehouse, among others. They replayed the song in a full live setting in Brooklyn’s Dunham Studios — along with members of Budos Band, Sharon Jones & The Dap-Kings, and Menahan Street Band — recording 100% analog to 2” tape to get a vintage feel.
"My plan was to not remix, but re-play the song in a full live setting, as if in 1975 Bowie recorded the original and then flew to Brooklyn (or even Jamaica) to cut another take with “my” players. Everything was recorded 100% analog to 2” tape. All equipment that was available before 1975. My approach was to take influence of the Jamaican musicians (and recording styles) of the mid-seventies, and their infatuation with American Soul music. If you dig it, that would be great. Knowing that BOWIE digs it, I’m over the moon."


...CHECK THE PHOTO SET AND THE "MAKING-OF" VIDEO FROM THE RECORDING SESSION.